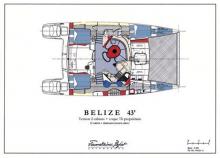 This Belize 43 Maestro was built in 2001 by the Fountaine Pajot shipyard. This sailing catamaran has never been rented out, is well equipped and has been very well maintained. European VAT has been paid.

French flag, this cruising catamaran is currently available for viewing in Martinique and is available from April 2020.